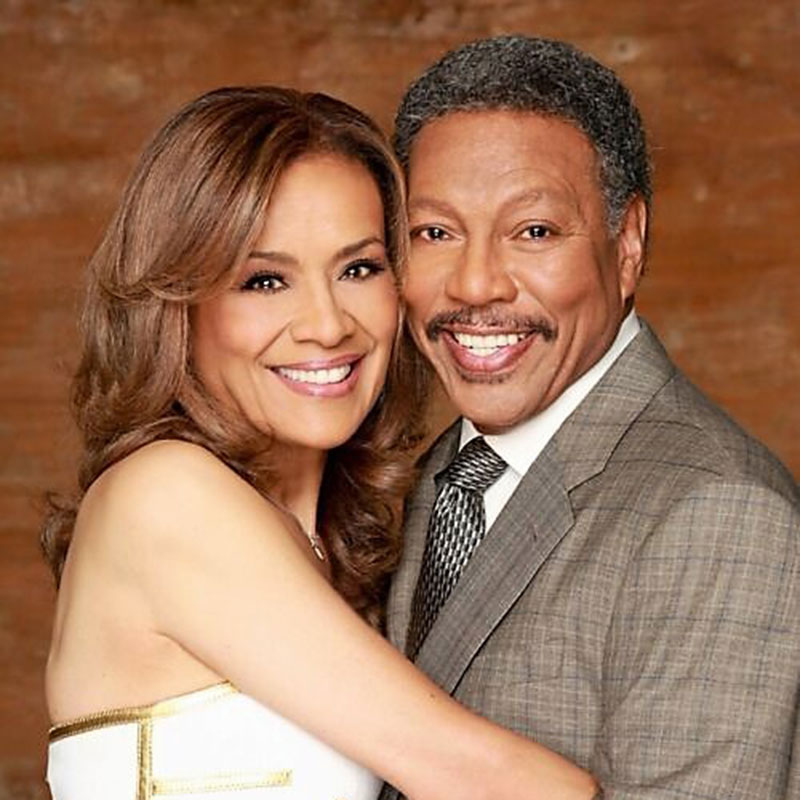 by Michael P. Coleman
Most know that over one half of all marriages end in divorce.  In Hollywood, that “success” rate is even lower.  Just this week, EXTRA reported that Will & Jada’s 17 year marriage “…is the equivalent of 50 years in the midwest!”.   So when a celebrity couple celebrates their 45th wedding anniversary, as Marilyn McCoo & Billy Davis, Jr. are doing this weekend, that’s news.  Heck, BOTH of my marriages don’t total 45 years!

In honor of the happy occasion, we’re sharing our intimate, EXCLUSIVE conversation with The 5th Dimension founding members from last April.  They give us a glimpse into their relationship and secrets to keeping the fire burning.
Enjoy, the raise a glass to Marilyn & Billy this weekend!

7 Grammy Awards.  A television variety show.  Stage performances, including Broadway.  Sold out concerts all over the world.  A successful memoir.  Few can boast the level of success of legends Marilyn McCoo & Billy Davis, Jr.  As founding members of The 5th Dimension and a subsequent successful career as a duo, they’ve earned 15 gold and 3 platinum records over the last 40+ years.  They’re celebrating their careers with a musical tribute to the hits and productions that have made up their multifaceted careers, and just brought their incredible live show to a fervent, standing-room-only crowd in Napa.

With a resume that impressive, one might have expected McCoo & Davis to bring Hollywood-level egos to the table when I sat down with them for an exclusive conversation just prior to their Napa show.  Refreshingly, they couldn’t have been more down-to-earth and humble, glossing over major career achievements and expressing gratitude and thanks to God and their faithful fans for the arch of their careers.

I asked the husband-wife duo for the secret to a 45-year marriage, why they thought their music lives on 50 years later, and what they felt about the fans who’ve supported them.  I also asked McCoo for her thoughts about Whitney Houston’s cover of “Saving All My Love For You”, which McCoo recorded seven years before Nippy got a hold of it, and when we’d get the album of torch songs that so many of her fans have been clamoring for.  Here are a few excerpts of that conversation.

HUB:  Congratulations on your 45 years of marriage!  To borrow a phrase from a song you covered a few years ago, how do you keep the music playing after 45 years?

Davis:  That’s a great question!  We both started out together as friends, and we’ve maintained that friendship all the way through.  We’re even closer now than we were when we first got together.  We seemed to never lose that. And that’s a true blessing.

Hub:  Marriage is one thing.  Working together for almost 50 years is another.  How have you kept it fresh after all of these years?

McCoo:  We’re passionate about the music — and have been since we were kids, even before we knew each other. When The 5th Dimension started, neither one of us wanted to be in a group. We had done the group thing.  We’d been associated with people who wanted to sing in groups but on their own terms, but they didn’t really have the passion to do it.  They weren’t serious.  With The 5th Dimension, Billy and I would ride to rehearsals together, and just talk about who we were and what was important to us, and that was how our friendship developed.  We also developed a respect and appreciation for each others’ commitment to music.  And that was how the friendship started.  And it went from that to love.  That made a difference.  When you have a true friendship with someone, you want to keep that.  If your partner is your friend, you want to keep that special, too.  We’ve faced challenges — all couples do — but you have to think about the ramifications of your choices, and we decided that the marriage — and our friendship — was worth the work it takes to stay together.

Hub:  Your chemistry in the studio is undeniable, but you’ve only recorded five albums as a duo. Why have you done so few recorded projects together?

Davis:  We didn’t really plan it that way, but it’s just the way things turned out.  There was a change in the music scene.  All of a sudden, major labels and record shops went away, and projects started being independently produced and released.  We reached a point where we didn’t know what direction we should take, whether we should start releasing projects independently.

McCoo: There came a point when we were perceived as not being viable anymore.  If a label thinks that you’re not going to sell three or four million copies, they’re not going to invest the money in your project.

Hub:  I saw you live for the first time a few years ago, and as great as the show was, I was stunned to see so many of your fans who were so connected to your music, after so many years. Folks in the audience wouldn’t let you leave the stage, they lined up to meet you afterward… how do you account for that kind of fan loyalty over so many years, with your having released so few projects?

McCoo:  Well, we can’t answer that one.  That’s a question for the fans.  We’re just thankful for it.  We’re thankful for people who appreciate what we do and still want to come and see us.

Hub:  You give an amazing live show.  It’s so great to see artists who are still singing and performing great pop songs.

Hub:  One of your gifts is giving a whole new context to time-worn songs. “Let’s Stay Together” is typically sung by a single artist, but the lyrics take on a new meaning when sung by two people who’ve been together for so long.  I could say the same thing about your covers of Joe Cocker’s “You Are So Beautiful” and Marvin Gaye’s “How Sweet It Is To Be Loved By You”. Do you have a process for selecting songs that you’ll perform, or do you just kind of stumble across the right ones for you?

Davis: When we decided to record “The Many Faces Of Love” album to celebrate our 40th wedding anniversary a few years ago, we went back to songs we loved as we were coming up, and those came out of that project. We wanted to do the happy songs of love, the sadder songs, songs about people working through problems.

McCoo:  Of course, we always look at songs in terms of whether the lyrics will work between two people going back and forth.

Hub:  Well, the ones you’ve selected are perfect.

Hub:  Mr. Davis, you may have recorded my favorite version of “When A Man Loves A Woman”.

Hub:  And while I’m thinking about songs you’ve recorded individually, you recorded the original version of Whitney Houston’s “Saving All My Love For You”, Ms. McCoo. Whitney did an amazing job with it, but that’s a very mature lyric, and you’d lived enough at that point that you could sell that song in a different way.

McCoo:  Well, I enjoyed singing it.  But I enjoyed Whitney’s version, too!  She had the chops to pull off all of those notes that I wanted to hit!  [Laughs]

Hub:  Why did it take the two of you so long to record a live album?

McCoo & Davis, in unison:  We just never thought about it!

Davis: …and all of a sudden we were doing a show, and it suddenly hit us that we had never done a live CD.

McCoo:  …and we liked the material we were doing live.  We thought we’d try it.  Our background singers were hitting those notes, and the music was clicking, it was just right.  We had no plans to do another CD at that time, but we were loving that show and getting a lot of comments from the fans about that show, so we thought we’d record it and go for it.

Hub:  Another of your gifts is combing two songs that might not on the surface be thought of together. You close the live CD with Kirk Franklin’s “Lean On Me” and The O’Jay’s “Love Train”. It’s an excellent medley. You also combined Lady Antebellum’s “Need You Know” with one of your older songs, “Easy Way Out”. They are incredible pairings.

Davis:  I’m glad you got that!  We get excited about putting songs together, our live show together. So when someone “gets” it, it makes us feel good.

Hub:  Which is each of your favorite song to hear the other sing?

McCoo:  I love to hear Billy sing “You Are So Beautiful” and “When Something Is Wrong With My Baby”. Those songs fit his voice so well.

Davis:  I love to hear Marilyn singing “How Sweet It Is” and “Why Should I Care?”  She has that flavor in her voice, you know?

Hub:  You have a way with torch songs, Ms. McCoo.  Have you thought about doing an album of torch songs?

McCoo:  I haven’t, but I should since I’ve loved singing them since I was 12 or 13. I used to love singing a song called “That’s All”.  Another of my favorites was “The Nearness Of You”.  I didn’t know anything about what those lyrics were saying!  [Laughs]  But I always wanted to be an actress, so those songs were right up my alley.  I think you’ve planted a seed here!