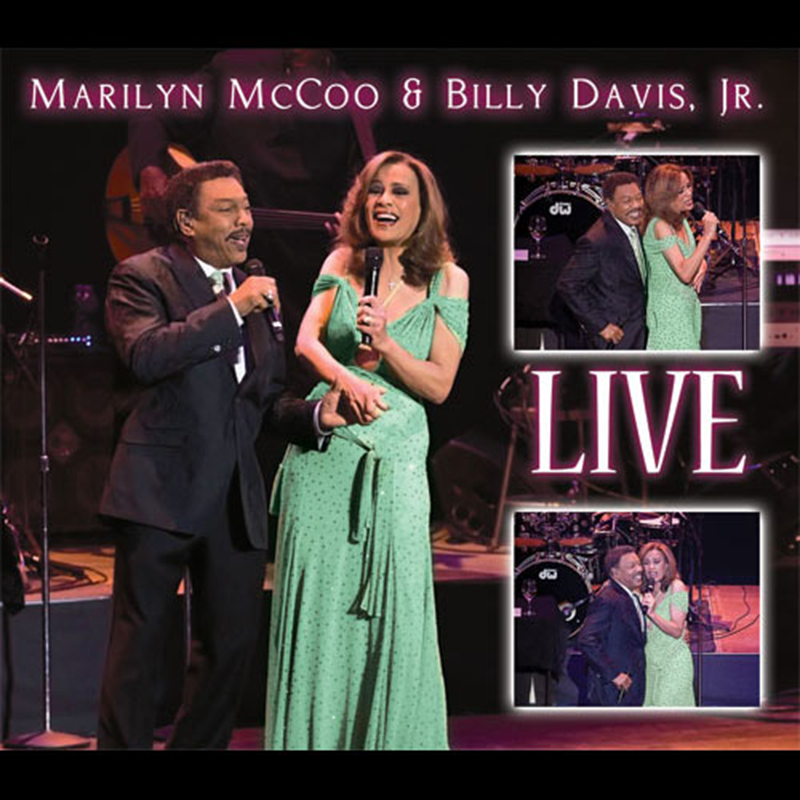 The Many Faces of “Live:”
McCoo & Davis at the Top of their Show
A CD Review by Robert-Allan Arno
_______________________________
Billy Davis, Jr., one of music’s greatest Soul singers, is the king of effortlessness.  And he knows how to tell a story.  Ever the engaging showman, he quotes a Bible verse from Ephesians before further tugging at the heartstrings with his bluesy interpretation of the classic, “When Something Is Wrong With My Baby.”  Marilyn McCoo, whose eternal beauty seemingly reflects the incandescent soul of her silky voice, does something uncanny here.  She’s found a tune from a recent Clint Eastwood movie that’s “pure Marilyn,” it seamlessly fits as an extension of her body of solos that are her fans’ cherished gems. There’s a soupcon of “Never My Love,” “If I Could Reach You,” “Open Your Window,” and more, in her spectacularly delicate yet empowered treatment of the jazzy ballad, “Why Should I Care.”  Yes, La McCoo should sing every theme song of every movie out there, I just bet you’ll be thinking!
In their charming patter, Marilyn and Billy state, “The old songs let us do the new songs.  (We all tend to say) they don’t make ‘em like they used to… but then along comes a song…”  And so we get a haunting medley of a fan fave from MarBill’s first duet album (35 years ago!), the pensively languid “Easy Way Out,” melded with a current chart-topper by Lady Antebellum, “Need You Now.”  Later the duo digs into Alicia Keys’ “If I Ain’t Got You.”  A touch of Country on the former, neo-Soul on the latter, they’re emoted with such deep finesse, you can see and hear how this pair could be hitmakers themselves in any decade.  Further addictive romps like the Earth, Wind and Fire version of “Gotta Get You Into My Life” prove why McCoo, Davis and their 5th cohorts influenced not only EWF, but an entire musical generation.  The generous duo is never afraid to give homage back.  They salute the late Nick Ashford with a Funk-ily ingenious revision of a 5th Dimension Top 20, Ashford & Simpson’s “California Soul,” that sounds more like it’s from a Marvin & Tammi album than The 5th’s.  Much fun ensues, too when Billy gets all good-natured raucous on “Steppin’ In,” the twosome also brings the Disco-tinged goods to their Grammy winning duet signature, “You Don’t Have to Be A Star (To Be in My Show).”  Then Marilyn stops everything with the quintessential torch that is the jewel in her crown, “One Less Bell to Answer.”  And this ain’t your Mama’s “Bell,” this is all “new year,” the culmination of show biz perfect meets life experience gut-wrench.  Billy in turn, goes from poignant to “true grit” in the finale, “Lean on Me”/”Love Train” while Marilyn, the gifted back-up vocalists and the audience hop aboard with joy.
Co-Producers Davis and Laythan Armor make sure “Marilyn McCoo and Billy Davis, Jr. Live” packs such a soul-thrilling “picnic” of delights, you’ll want to listen again, and again…then go see them perform in 2014…then go home and listen again!  With a special nod to Music Director Darrell Alston and stand-out guitarist Major Black amid a stellar band, the project is a testimony to artistic integrity, creative verve and enduring love.  It just doesn’t get any better from Marilyn & Billy, two icons who clearly adore one another, their work and the continued opportunity to bring such diverse magic to their equally diverse, dedicated fans.
Original Review Post